As a seventh grader in Mrs. Balmer’s social studies class, Elizabeth Heffern was given an assignment to identify and examine countries across the globe. These early explorations of the non-western world sparked an interest to move beyond her small-town surroundings, to understand other cultures, and to observe and experience all that was out there firsthand.

While Elizabeth has approached much of her post-secondary education through an international lens, she also recognizes the value of having grown up in New Hope-Solebury schools, where students benefit from a small district size and receive personalized attention from their teachers. It was the encouragement she received from our own Mr. Loving that helped her rise to the challenge of his AP Statistics course, and later, to pursue the study of statistics at Cornell University. Elizabeth recalls that her first test grade in Mr. Loving’s class was among the lowest test scores she ever received. However, undeterred, she routinely visited his classroom in the early mornings and received extra help with the course material. The following year, Mr. Loving guided her through an independent study of statistics, enabling her to explore advanced concepts and career possibilities in the field. She conducted informational interviews with a series of professionals through this study and learned many real-world applications for statistics, ranging from market research to epidemiology to actuarial science.

Elizabeth graduated as valedictorian of her New Hope-Solebury High School class in 2016 and embarked upon a gap year before enrolling at Cornell. During this gap year, her global interests took her to Senegal in West Africa, where she participated in a cultural immersion program called Where There Be Dragons. She lived with a Senegalese family, engaged with the culture and language, and studied some of the country’s development challenges, including its rural exodus. These experiences were life-changing and fundamentally altered her approach to learning. While most of her educational choices had previously been motivated by a drive to achieve, those same choices became inspired by her own desire to learn and were made with a deep appreciation for the knowledge available to her. 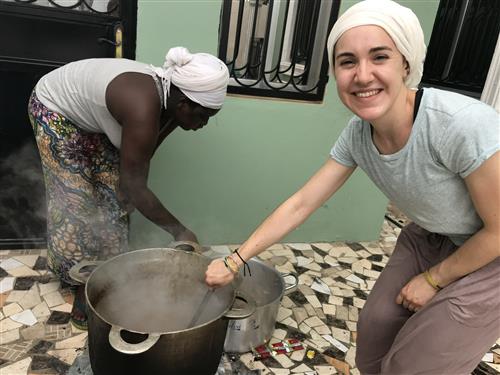 At Cornell, Elizabeth pursued an internship opportunity with The Gambia Bureau of Statistics that enabled her to return to West Africa for a summer. She was also invited to join a research team advising on a rural development project in Northeast India. During this trip, she spent time with local residents to better understand their lives and some of the challenges they face, such as lack of access to education, proper nutrition, and public health resources. For the past year, she has been a research assistant for Professor Christopher Barrett, studying the transitional dynamics of food insecurity in the United States.

Elizabeth excelled at Cornell and was recognized as a Merrill Scholar, one of the school's highest honors. Awarded to students representing the top 1% of their class, Merrill Scholars are selected for academic achievement, exceptional leadership, and their potential to contribute to society. Each Merrill Scholar was given the opportunity to honor a teacher who has influenced their educational journey. Elizabeth chose to honor Mr. Loving for the many ways he has inspired and supported her aspirations. Elizabeth said, "his engaged teaching style, unique sense of humor and enthusiasm for the subject made me excited to learn more about a field I might have otherwise overlooked. Mr. Loving always went beyond his responsibilities as a teacher, overseeing my work on an independent study statistics course and serving as a source of guidance as I planned my academic future. He remains a trusted advisor, and I am grateful for the chance to share with this community the influence he has had on my life."

Following her recent graduation from Cornell, Elizabeth has accepted a position on the Equity Research team with Barclays Capital in New York. She hopes to someday continue her studies in graduate school and to continue to pursue her international interests.